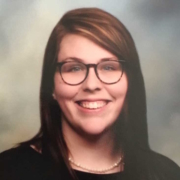 The Fall 2018 class of Appalachian Regional Healthcare (ARH) Scholars includes students from all over the region, in various stages of life with one common goal – to make a difference in healthcare throughout Appalachia. Twice a year, students from across the region are invited to apply for the ARH Scholars program. Recipients are awarded a $5,000 academic scholarship to pursue a degree in healthcare.

Brooke Benton grew up in a small town called Jackson in Eastern Kentucky. She completed her undergraduate studies at Transylvania University where she studied Chemistry and Classics. She is currently a 4th year medical student at the University of Pikeville Kentucky College of Osteopathic Medicine. Before entering medical school, Brooke served as a college and career counselor at Jackson City School and a high school chemistry and physics teacher at Breathitt County High School in Jackson. While she loved Lexington, she decided to return home for medical school to be closer to family, friends and the community she loves. She originally decided to pursue medicine after attending a health careers summer camp at the University of Kentucky.

“When I was a sophomore in high school, I was invited to the University of Kentucky for a summer camp with health careers,” Brooke says. “I did a lot of shadowing and classes over the summer, and that’s really what initially drew me to medicine.”

Entering medical school, Brooke had the option to complete coursework to become a Doctor of Medicine (MD) or a Doctor of Osteopathic Medicine (DO). She ultimately chose the Osteopathic path which focuses on treating the entire body and mind rather than just the physical body.

“Osteopathic medicine just means that it’s a different philosophy,” she says. “It’s a very old tradition and I think it’s a growing one. It’s grown a lot in the last couple of years with new schools popping up all over the country.. After we graduate, we get the DO professional title after our name. We have the same practice and privilege rights as MDs. I took all the same classes and licensing board exams, and the curriculum is the same; the added benefit is the philosophy as well as training in osteopathic manipulative treatment (“OMT”). We have specific details within that philosophy about how we’re treating the whole patient’s body. We utilize OMT as a modality of treatment just as we might prescribe a medication or do a surgical procedure; this is a noninvasive and conservative approach to relieving dysfunction within the musculoskeletal system to better enable the body to heal itself from various ailments, be it back pain, headaches, acid reflux, etc. ”

This concept of treating the entire body and using a more holistic approach to healthcare intrigued Brooke. She has always had a passion for science, but as she began working more with patients, she developed a passion for the personal aspects of healthcare.

“Honestly, I didn’t know a whole lot about osteopathic medicine before I enrolled in medical school in Pikeville – I just wanted to go to medical school and really wanted to be close to my family,” Brooke says. “The more I delved into the history and philosophy behind it, I realized it’s something that is really easy to get on board with. We all want to be treated as a person. We don’t want to be treated as a lab value or an x-ray. I liked talking to people and learning about their stories, and that’s been a fun component of this as well. Learning more about people – where they come from, what motivates them – that goes over well with patients because we all want to be heard. That fits well with my goals and my career.”

Brooke has had several mentors throughout her life including her mother and two women who have served as examples in the medical field.

“My mom has been a big supporter and having her presence has been a big help,” she says, “Med school is busy. I don’t have a lot of time to do the normal running errands and keeping house work. She always listens if I’ve had a bad day or helps if I need something, so it’s great having that support system. Dr. Joanna Santiesteban, MD , an OB/GYN in Auxier, KY at Physicians for Women, has been a great mentor who guided me when I first was interested in the field of OB/GYN and trained me during my third year of med school for clerkship. What I know about the basics of OB/GYN, I learned from Dr. S. Dr. Holly Gallion, MD introduced me to a subspecialty within OB/GYN, gynecologic oncology. She taught me not just how to be a surgeon but how to treat people. I got ‘How to be a Surgeon 101’ from her, and I also learned how to take care of patients and make them feel like they’re more than just a medical record. At the end of the day that’s what we’re all about.”

Since entering medical school, Brooke has had the chance to complete clinical rotations all over the country. This has allowed her to gain experience in various hospital atmospheres preparing her for anything she faces as a physician. She was completing her rounds during a shift at the University of Kentucky when she learned she had been named an ARH Scholar.

“I was just at the hospital taking care of my patients [when I got the news], so it was a nice surprise,” she says. “It was a difficult week, so it was nice to have good news. I was very excited and honestly a little bit surprised, but good surprised. This scholarship means I will have freedom to advance my career without the stress of extra loan money.”

“The scholars are selected by the ARH Scholars Judging Committee,” says Danya Anderson, ARH Scholars Coordinator. “Once I receive the applications, I prepare them to be sent to the committee by making them a ‘blind’ application, which makes it fair for each applicant. The Scholars award is paid in two installments of $2,500 directly to the school.  One is payable after verification and the other is paid the following year. For this round, we had 73 applicants with 10 finalists awarded.”

After completing her residency, Brooke plans to return to Eastern Kentucky to practice as an OB/GYN. She is excited to offer care to women and their families, some of whom only ever visit the OB/GYN for care. Her heart is in the Appalachian region with the community she loves. She believes if the people in her hometown need her, it does not make sense to go elsewhere to practice.

“I just really want to take care of women and their families,” she says. “It’s about bringing awareness to women’s health issues. For a long time, there was a stigma associated with having a ‘female problem’ and it’s something we don’t really talk openly about. If someone has high blood pressure or diabetes, we’ll talk about that. But when women are coming to their providers, there’s a certain hesitancy, even with their providers who they trust, to discuss these issues. I really hope I can help to break down these barriers. If I can hit a targeted population that may not be getting preventative care elsewhere, I want to fill that gap.”