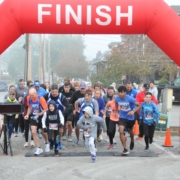 More than 70 people participated in the fifth annual “Run for Shelter,” one of two fundraisers that will help Floyd County’s homeless shelter keep its doors open this year.

The shelter, called the East Kentucky House of Hope, opened in March on Ky. 122 near Martin, following years of work by a committee of volunteers who sought to help homeless people in Floyd County.

One of those organizers, Mickey McGuire said the facility has helped more than 100 homeless residents since March.

He talked about a Vietnam veteran who recently came to the shelter as well as two women who came there for help and now are renting their own place.

“The wonderful thing about it, and we understand you can’t save everybody, but you can try to help everybody, and out of all the people that we’ve taken in, we can count about 40 of them that are now no longer homeless,” McGuire said. “We have found them permanent housing. We’ve got them on a budget. We got whatever problem it was that made them homeless, we got it taken care of and found them a place they could afford. We set them down, made them a budget, maybe found them a job.”

He said shelter staff, employees of Kentucky River Community Care, have found jobs for more than a dozen people who stayed at there. He said none of this would be possible without community support.

“The blessing of the thing is, I don’t think that all of us realized what a great community we live in, just how many people have come forward,” McGuire said. “We have dinner served at the shelter every night. We’re not allowed to cook there, and either some family or some church or some civic organization … they go up there and serve dinner every night, year round. Sometimes, you just think how are we going to make it, and then all of these people come forward.”

He said being a part of the shelter committee has been one of the most rewarding experiences of his life.

He said the Run for Shelter, sponsored by Appalachian Regional Healthcare on Oct. 19, will raise about $5,000 for the homeless shelter. At the event, ARH employees presented a check for more than $2,100 — funds that employees have raised all year to help the shelter.

McGuire said the shelter needs $50,000 to operate for one year. Committee members hope to raise the rest of the funds needed at the upcoming “Dancing for Shelter” fundraiser, which will be held at the Mountain Arts Center on Nov. 1.

“We have raise enough money to operate on for a year, and so, we have to pay electric and water and anything, any supplies and cleaning and all of that,” McGuire said.

McGuire said several local officials have been practicing their dance skills to prepare for the competition. Last year’s winners, Willard Kinzer and Danette James, have been invited back to present the trophy to this year’s winners.

“Each of these individuals (have) donated their time, their energy and taken away from their own lives in order to make this event a success,” a press release said. “Last year was just unbelievable, over the top, with a sell-out crowd. Ticket sales have been strong, but there are still tickets left fort this year’s event.”

Dancing for Shelter will begin at 7 p.m. on Friday, Nov. 1, at the Mountain Arts Center. Tickets range from $18 to $28, and all proceeds benefit the homeless shelter. Audience members will be able to vote for their favorite dancers by texting their first and last names to, (606) 220-2880 during the competition. Dancing for Shelter will also feature a silent auction to raise funds.