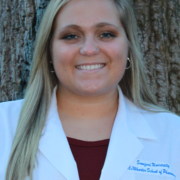 Aryn Pinson grew up in Pikeville, Kentucky, and she loved it. “I don’t think there is any better place to grow up. I love the hometown feel I get from Pikeville, and always having a community behind you is incredible.”

Aryn also loved Pikeville High School, where her mother is a teacher and where Aryn played volleyball in addition to her academics.

“I don’t think I would be where I am today if I didn’t have Pikeville High School.” Aryn says, “They taught me to have a strong work ethic.”

It takes a strong work ethic to succeed in medicine. While no one in Aryn’s family is in the medical field, she was inspired by friends of the family Sandy and Joel Thornbury, pharmacists who own an independent pharmacy in Pike County.

“They were such a good influence on me, and they are so devoted to their community. When people come into the pharmacy, the Thornburys know them by name and know what they need. They are willing to do anything for anybody. I www.QtheAgency.com

think a pharmacist should have those qualities. I love this profession and I credit them completely for that.”

After finishing up her four years at Pikeville High School, Aryn headed off to Eastern Kentucky University for her pharmacy school pre-requisites. Then, Aryn moved to Birmingham, Alabama to start pharmacy school at Samford University. So far, she’s enjoying the opportunities that Samford offers its students.

“This year I took part in the Birmingham Healthcare Access movement, which is a community health fair. We took people’s blood glucose and BMI and offered counseling services. I was stationed doing BMIs, taking the height and weight of patients and calculating their BMI for them. At a different station, someone would talk to them about what their BMI means and how they should go from there. It was eye-opening for me because it brought to light the need in the community.”

With so much need in the community, Appalachian Regional Healthcare is dedicated to helping students achieve their goals of getting a medical education. Aryn Pinson first heard about the ARH Scholars opportunity from her aunt who works at Hazard ARH Regional Medical Center. Though Aryn was overwhelmed at school during the application window, she pushed through and applied. And when she won?

“I was in shock. I could not believe it. It’s awesome that a healthcare provider in our community wants to help students strive for their goals, because sometimes funds are limited, especially in graduate school.”

When Aryn graduates in May of 2022, she plans to start her career at a bigger chain pharmacy to learn the ropes and catch her stride. Ultimately though, she wants to move home to Pikeville and open her own pharmacy. www.QtheAgency.com

“I want to help the people in my community,” she said. “I like having an impact on someone’s life. Being from a small community, pharmacists are often the most accessible healthcare provider. If you’re having a medical issue or a concern, you can just walk in and talk to a pharmacist. I want to be the person that my community can come and talk to, and I can help them figure out next steps. “ 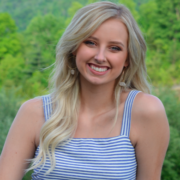 Taylor Herrell just graduated from Letcher County Central High School in Whitesburg, Kentucky. Now she’s making plans to continue her studies as a chemistry pre-medical student at the University of Pikeville, where she hopes to graduate in the spring of 2023, before heading on to the Kentucky College of Optometry. While she had been considering optometry for some time, it was actually a viral video on social media that sealed the deal for Taylor: “I know this sounds crazy, but I saw a video about this little girl getting glasses, and being able to see clearly just made her day. Seeing how glasses made that little girl really happy just confirmed that’s what I wanted to do.”

Her interest in medicine has been largely inspired by her family, as both of Taylor’s parents are in the medical field. Her mother works as a nurse midwife, and her father as a nurse anesthetist. “I’ve always seen them working to help other people. Sometimes I would have to go to the hospital with them, and I always loved that environment. It’s great to see people helping people, especially in the small community that we have.” Taylor says that her family’s insistence that she follow her dreams and constant support have been hugely inspirational.

In addition to her parents, Taylor credits the Letcher County Central High School guidance counselors with pushing her towards her goals. “The guidance counselors encouraged me to do whatever I could to succeed… and to apply for a ton of scholarships.”

It makes perfect sense then that Taylor was recently awarded an educational scholarship from Appalachian Regional Healthcare. Taylor’s mother, who used to work at an ARH hospital brought the scholarship to Taylor’s attention, and Taylor couldn’t wait to apply. Her reaction when she won? “I was really overwhelmed and excited! I couldn’t believe it, honestly.”

As she prepares for her next step, she looks forward to someday returning to her hometown of Jenkins, Kentucky to practice.

“I want to stay close to home. I’ve never really been attracted to the idea of moving to a big city. I just love the people here and I love how everybody gets along with each other. Jenkins is a really small rural community where everyone knows each other. It’s nice to see someone you know everywhere you go. I want to give back to my community and help those who have helped me to succeed.”

Logan Smith, from Barbourville, Kentucky became interested in the medical field in his sophomore year of high school. After sustaining a knee injury and subsequently undergoing a knee surgery, his interest in healthcare was piqued, but it was his time in physical therapy that was truly inspiring to him. He says it was the attentiveness of the physical therapists and assistants that first caught his attention: “I really appreciated how helpful everyone was at that office, and it sparked my interest as a potential career because I like work that’s more hands-on.”

He made sure to ask questions while he was there, and credits that therapist with inspiring him to pursue physical therapy as a profession. “I asked a lot of questions and he really helped me to understand the ins and outs of the job” Logan said. A friend of the family who works as a physical therapy assistant at Middlesboro ARH Hospital also mentored Logan and encouraged his interest in physical therapy. “I asked a lot of questions of him too. We talked about his work and what he liked and didn’t like about it. It was helpful to have people I knew who could honestly talk to me about the pros and cons of the job.”

Logan just finished his freshman year at Southeast Community College in Middlesboro and will graduate with his associate degree next May. He’s planning to transfer to University of Kentucky to finish his Bachelors before going on to obtain his Doctor of Physical Therapy degree.

Like so many other students pursuing a degree in healthcare, Logan’s road is long and expensive, and he’s driven to apply for as many scholarships as possible. He was ecstatic to discover the ARH Scholars opportunity, and even more thrilled when he was awarded the scholarship. “I’ve applied to so many scholarships, so to get even one is pretty rewarding,” Logan reflects. “The medical field is one of the most expensive fields to go into when it comes to the schooling. Prices get pretty high when you’re a medical student, so every little bit helps. It’s great for ARH to give back this way.”

ARH gives back through ARH Scholars, because ARH Scholars are driven to give back to their community through their work in the medical field. “Ultimately, I just want to help younger people who are injured, like I was. I feel like I can connect with them, and because I understand the mental process and physical process of healing, I can be there as a mentor. I think I’ll get a sense of gratification from guiding a young person from injury to performing the way that they want to. I can’t wait to see my patients get healthy.”