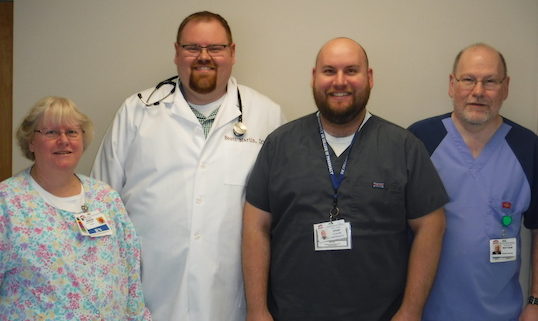 If you happen to find yourself a patient at Tug Valley ARH Regional Medical Center, chances are you will come in contact with a member of the Martin family. You’ll be glad you did, because while there are only four family members on the job, they have nearly 80 years of combined experience working at the hospital. They cover everything from the lab to pharmacy, nursing and a medical practice in pediatrics.

“This has always been home to me,” said ‘Dad’, Matthew Martin. “My parents always took us to ARH when we were children. It was our hospital even though there was another hospital right up the mountain. When I finished school and became licensed to work as a lab technician, Tug Valley ARH, formerly known as Williamson ARH Hospital, was the logical choice,” he said. The fit could not have been better, as he’s been working in the lab for the past 40 years.

“I know it seems odd, but I’ve always liked blood. Blood tells you things if you know how and where to look. I can provide answers through the lab,” he explained. “It’s a different story and outcome every day.”

Then, there is ‘Mom’, Deone Martin, who works as an intensive care unit (ICU) RN. She started working at the hospital in 1981, and with the exception of a short period as a stay-at-home mom, has been at Tug Valley ARH ever since.

The hospital was even the catalyst for the Martins finding each other. “She was working on the first floor and so was I,” explained Matthew. “I’d walk by and see her. It didn’t take me long to ask her out. We started dating in 1982 and married in June of ’83. I know the courtship went pretty fast but we’ve been married 34 years. We think it’s going to last,” he laughed.

Deone and Matthew started a family soon after marrying with the birth of their son, Scott, and a second son, Brian, 16 months later. A third son, Michael, came along in less than two years, but suffered with osteogenesis imperfecta, or what is commonly known as brittle bone disease. “We knew pretty early on that something wasn’t right,” explained Matthew, “but when we took him to the doctor, his arms and legs were broken and there had been other fractures. We were devastated.”

It was a difficult diagnosis for the young couple who had two boys and demanding careers, but the Tug Valley ARH family was there to support. “There was health insurance and benefits that came with our jobs, but it was also the people that supported our family,” he said.

“We only had Michael for nine months, but he changed our lives. We were so young and didn’t have a lot. Michael was so sick, Deone had to take a lot of time off, so her paychecks were pretty lean. It was a respiratory syncytial virus and pneumonia, which ultimately took Michael. I remember the staff taking up a collection and giving us six or seven hundred dollars,” he said with a slight pause. “Everyone gave freely from their hearts and that was a lot of money. We’ve never forgotten the generosity and love we felt at that terrible time.”

But Michael’s short life also had an impact on his older brother. “Scott was only about four-years-old at the time, but he watched Dr. Mary Johnson, who had been a long-time ARH pediatrician (retired around 2001), provide extraordinary care for his baby brother. Almost immediately, he declared he wanted to be a doctor. A pediatrician,” said Matthew. In 2013, Dr. Scott Martin began working at Tug Valley ARH, alongside Dr. Mary Johnson’s son, Dr. Charles Johnson, who is also a pediatrician.

Matthew and Deone worked together raising their sons in the shadow of Tug Valley ARH. “I’d go in early to the lab around 6:00 am and then get off around 2:30 pm. That would give me just enough time to get home and allow Deone to leave for her nursing shift from 3:00 p.m. to 11:00 p.m.”

Once home with the boys, Matthew insisted on homework as a top priority. “They knew the school bags needed to come out. If there was a spelling test we’d work on the words each night. We’d read a chapter in their biology books and I’d ask them questions. I taught them how to study and that is so important,” he explained.

“It was different when I was growing up. There were seven of us—six boys and a girl—and my dad worked as a coal miner. Being a coal miner was just what everyone did, but my father believed education could make a difference,” said Matthew. “As kids, we were all competitive. I have a twin and he was valedictorian of our class and I was the salutatorian. My kids were the same way.”

Matthew says Scott, the oldest, is a little more “quiet than his brother Brian, but once either of them get to know you, they open up. There was never a question of them going to college. They knew we expected them to study and make something of themselves.”

When it came time for Brian to select a career choice, ARH topped his list. He is currently working at Tug Valley ARH as a pharmacist. Brian received his professional degree from the University of Kentucky Pharmacy School. His brother, Scott, received his professional degree from Pikeville College of Osteopathic Medicine. He then completed a 3-year residency at the University of Kentucky Medical Center. “They were each in the top 10% of their professional classes and both are excellent at what they do professionally at Tug Valley ARH,” said their proud father.

According to her husband, Deone “loves being a hands-on nurse. The patients can tell she has a tender heart and loves what she is doing. I couldn’t say she loves the paperwork, but she certainly loves the nursing. Growing up, Deone had an aunt who was sick for seven or eight years. She’d go over and try to help while the aunt called her ‘my little nurse’.” Deone Martin never looked back and became an RN. Now, she provides care in the ICU, even though she has worked, at some point, in most areas including peds and same-day-surgery.

“I’ll die in the hospital” said Matthew. “I mean I’m not planning on dying anytime soon—I have at least five more years before retirement—but it’ll be right here because this is home. For 40 years ARH has given me and my wife a paycheck and a job, and neither of those are easy to come by. Times are tough.”

Matthew says he has watched the local economy become more and more depressed. “It’s not just the coal mining jobs that are impacted, but everything else. The restaurants and grocery stores. People can’t pay their bills.”

It’s a little unclear how Matthew and his family came to embrace the idea of helping neighbors and friends, but charity and reaching out to others less fortunate is never very far away from the Martin family.

“This community is a close knit family,” he began explaining. “It’s easy to reach out and check on your neighbor who might be 85 years old. During the year, each Sunday at our church we have a ‘penny march’. It’s now a ‘dollar march’ but it entails people walking up with a bible verse and a dollar and donating the dollar and verse. After 52 weeks of marches we have a nice amount of money to help four or five families at Christmas.”

But, it’s not routine giving around the holidays, or the checking in on an older neighbor that often makes the biggest difference. “We can tell. We know the signs,” Matthew began. “When we have a family come in with, say a sick child, and they are told the child is going to be airlifted to Lexington (to Kentucky Children’s Hospital at the University of Kentucky) we can see the panic. It’s only about a three-hour drive, but you know they don’t have the money for gasoline to get there themselves.”

This many years later, Matthew and the ARH family, don’t need to say much—“they just start collecting a dollar here and a five there,” he explained. “We get the family enough gas money and a little more so they’ll have something to eat. They are already so worried about their child.”

Matthew feels that ARH is simply the backbone of the community. “ARH has been good to my family. My wife and I were both able to have steady incomes, with benefits and time to be with our boys when they were young. Our boys received academic scholarships for college but they took out loans for their professional degrees. ARH came up with incentives for them to come back home to practice. It helped a lot!’

“ARH is everywhere around South Williamson,” said Matthew. “They recently donated defibrillators to area schools, they hold health fairs, provide mammograms at a discount, they donate hats and warm socks in the winter. This past October they had a cook-out where they gave the employees a nice bag filled with gifts—a blanket, a t-shirt, a phone charger and even a backpack. They were just saying thank you to the employees.

Matthew knows that in such a high-stress environment employees may have days where they feel overwhelmed. “Whatever job they have it’s probably difficult work,” he began in explanation. “As a healthcare professional, I just want to show others that I’m there for them. I always think I would hate to be judged at my worst, so I just try to help. Always have a smile and remember what it’s like when you are on the other side.”

Recently, Matthew was on the other side and needed surgery. He never considered anywhere but ARH for the procedure. “I know these people have 20, 30, 40 years of experience. They know what they are doing and I know how they care. People will ask me about going to a bigger city, a bigger facility. The bigger facilities are not even as good as Tug Valley ARH, much less better,” he laughed. “I’m sure I received some special treatment, but I know every patient is being treated special here.”

Deone and Matthew are both grateful that their sons decided to come home to practice medicine and pharmacology. “It helped that they married local girls,” said Matthew, “but they also wanted to give back to a community who had given so much to them. They love what they are doing, and they are happy.”

Matthew says he and his wife don’t think a lot about retiring yet—it’s still a bit off—but they know they don’t want to move. “I’m not sure I could make it in a big city,” said Matthew, “I know I don’t even want to try.” That is especially true since their sons and daughter-in-laws have given them three beautiful grand babies. “Our boys had their boys six days apart so it’s just like having three-and-a-half year old twins,” he said laughing. “Then we have a two-year-old boy. We live just around the corner and yet, they like to FaceTime. It’s just a great time.”

Tug Valley ARH will continue to play a large part in the lives of the Martins and the Martins will do the same for Tug Valley ARH. One grandson already wants to be a physician, and Matthew admits he likes being able to get to work in about four minutes. “People need lab work, they need a caring nurse, the right medication, and a good diagnosis. I love being part of the ARH community, along with my immediate family. Jobs like ours provides us with so many ways to make a difference. As a medical professional and a human. We can make a difference with just a few dollars in gas money, and even more of a difference by providing the best patient care.”

Nursing: The Challenges Are Worth The Rewards
Scroll to top