When Pineville, Ky. native Amber Bailey, a registered nurse at Barbourville ARH Hospital, learned she had stage four cholangiocarcinoma, she knew she had to fight this terminal cancer for her three children. What Amber didn’t know was her ARH co-workers would form an army to join her in the fight. 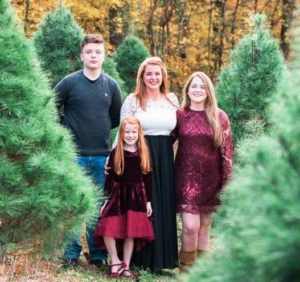 “Getting news that you have terminal cancer is beyond anything you can imagine,” shares Bailey. “As a registered nurse, I understand it medically, but as a single mom of three, I can’t accept that it’s happening to me. That’s why I am fighting this horrible disease with all my might, and I’m so grateful that my ARH family is fighting with me.”

Bailey has worked as a nurse at Barbourville ARH Hospital for almost 10 years. She described her work family as going above and beyond to help her since her diagnosis.

“I have the best work family at Barbourville ARH,” says Bailey. “They make me feel loved with every wonderful act of kindness they give to me and my children.”

Some of the ways her ARH family has shown their support is through preparing food and bringing groceries to her home, organizing gift baskets and holding silent auctions and selling t-shirts to help with expenses and donating over 200 hours of their own paid leave so she can keep her health insurance benefits. Because ARH is a large healthcare system with 13 hospitals, numerous clinics, and other groups, employees throughout the system who are learning of Bailey’s fight also are donating paid leave to her.

“My heart is so full and we are so blessed to be a part of an organization that goes far beyond all expectations to help one of their own,” shares Renee Carton, Barbourville ARH Surgical Director and Bailey’s supervisor and friend. “There has been an outpouring of love and generosity from our ARH family, through prayer circles and donating hours of paid leave so Amber can keep her health insurance. So many employees want to help Amber in her fight.”

And a fight it continues to be as she has days of excruciating pain which brings her to the Emergency Department at Barbourville ARH periodically. According to ARH Oncologist Mohamed Shanshal, MD, who is Bailey’s local oncologist, cholangiocarcinoma is an aggressive form of cancer in the slender tubes that carry the digestive fluid bile through the liver. “This is a very rare yet aggressive cancer and unfortunately for Amber, it has metastasized to her bones,” says Dr. Shanshal. “Still, there is hope through a clinical trial being conducted in Houston, Texas at MD Anderson Cancer Center.”

Bailey will be traveling to MD Anderson Cancer Center within two weeks. She will be staying in Houston for three weeks to participate in the first stage of the clinical trial.  To help raise funds for Bailey’s expenses, long-time friends and co-workers Ashley Carter, RN and Shannon Smith, CRNA, began a fundraiser Facebook page requesting help with Bailey’s travel and medical expenses while she is undergoing immunotherapy during her clinical trial.

“We call ourselves ‘Amber’s Army’ because we are rallying around her and fighting for her,” explains Carter.

Carter who has known Bailey for years and who was with her when she received the devastating news about the cancer, wants the community to know who Bailey is. “Amber is only 39 years old and a single mom of three with the youngest being age 10,” shares Carter. “Amber is a true friend and a very honest person. She enjoys helping others and now it’s our turn to help her.”

Smith also wanted to establish the fundraiser page for Bailey stating that this is exactly what Bailey would do for her or any friend or co-worker.  “I love Amber dearly. She is a great nurse and a wonderful friend,” Smith says. “Amber has a giving nature. In fact, just days before she received the cancer diagnosis, she and I served free Thanksgiving dinners in the Pineville community. She never complained about not feeling well—her focus was on others.”

Many staff at Barbourville ARH are keeping Bailey in their prayers as well as donating time and money to help her with her fight against cancer. They invite the people of Kentucky to pray with them and donate any amount to help her with expenses.

“I invite you to join Amber’s Army and help her fight this deadly disease,” says Smith. “I know that Amber is fighting as hard as she can, and she will continue to fight . . . not for herself but for her kids!

If anyone would like to make a donation to Amber Bailey’s medical expenses, you can either write a check to Amber Bailey and mail it to Barbourville ARH Hospital, 80 Hospital Drive, Barbourville, Ky. 40906 or make your donation online by going to the Facebook page at this address: https://www.paypal.com/paypalme2/amberarmy2020.