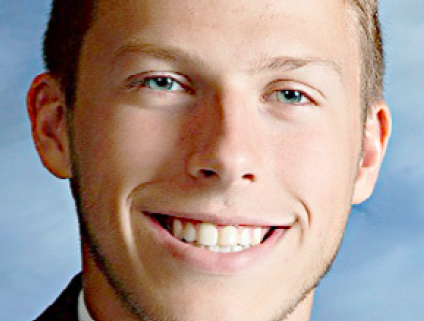 McKenzie Daniel is one such student. Born and raised in West Liberty, McKenzie just graduated from Morgan County High School. He’s wrapped up a busy high school career playing soccer and tennis, in addition to being involved with his local Boy Scout Troop and church. He’ll have only a few months to relax this summer before heading off to Eastern Kentucky University where he’s planning to study pharmacology.

What compelled him to choose a future in pharmacy? Partially, his time in the Governor’s Scholars Program. “Last year I did the Governor’s Scholars Program, which is a five-week program over the summer. My focus area throughout that program was health care, which got me started learning about the medical field. I really enjoyed that process.” In addition to his time at Governor’s Scholars, McKenzie credits one of his teachers at Morgan County High School with inspiring him to pursue medicine: “I had a really good teacher in high school for biology, anatomy, and chemistry, Ms. Rudd—Chrystal Rudd. She really pushed me to learn more about science.”

Medicine isn’t all about science and education; it’s also the ability to make quick decisions and take others’ lives into your hands. This aspect is enough to discourage some, but McKenzie isn’t worried about that at all. “I’ve been lifeguarding for the past few years, and I enjoy taking the responsibility of making sure people are okay.”

No small part of getting a medical education is the expense. This year, after submitting his second application to the ARH Scholars, McKenzie was finally awarded a $5,000 academic scholarship to pursue his dreams of a pharmacy degree. “I was pretty excited when I found out that I’d won. The first time I applied I got turned down, so being awarded the second time I applied was really surprising.”

After McKenzie graduates from Eastern Kentucky University in 2023, he’ll be heading off to the University of Kentucky’s College of Pharmacy. After that, he’d love to head back to Eastern Kentucky to work close to home. “My community has done a lot for me,” McKenzie reflects. “I’d like to pay the community back for what they’ve done for me. If anyone in my community has health problems, I want to be there to assist them.”