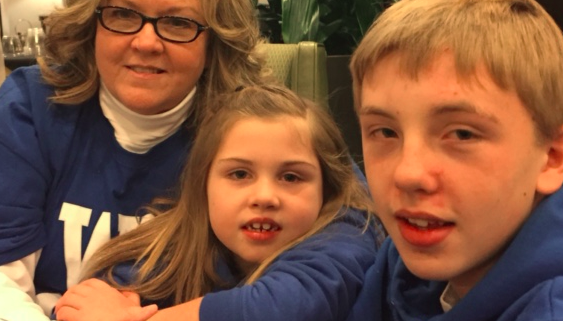 The women in leadership for Appalachian Regional Healthcare are a diverse group of strong, accomplished, intelligent women. Despite having these characteristics in common, each of them is unique, taking on a completely different set of responsibilities and challenges when they walk through the doors of ARH each day. From administrative responsibilities, to nursing and caring for patients, to the creation of new initiatives allowing ARH’s reach to grow, these women are nothing short of incredible.

The Director of Corporate Projects, Trena Hall is one of the main players in the expansion of ARH throughout eastern Kentucky and southern West Virginia. Her 40 plus years at ARH have fostered a passion and commitment to fulfilling the organization’s mission.

Trena’s journey with ARH began as a nurse at Whitesburg ARH Hospital, where she spent the first 13 years of her career. Her work ethic and success as a nurse prompted ARH leadership to promote Trena to a management role. From there she took on several other leadership roles, including Assistant Director of Nursing, Assistant Administrator and CEO at Hazard ARH Regional Medical Center and CEO of McDowell ARH Hospital. She has implemented a number of programs and key services during her time at ARH including the Open Heart Program, Inpatient Rehab Program, and Cancer Center in Hazard.

“I often tell my husband that I feel really blessed,” Trena says. “I absolutely love my job. It’s so wonderful to bring a group of very diverse people together and help them achieve their goals. I work with everyone from nurses and doctors all the way to construction workers and engineers. It’s truly rewarding being able to see that final result knowing this new or improved healthcare service is going to make a difference to patient care, the people who work in those environments and the entire community. You can’t put a price on that.”

There is a strong sense of camaraderie among the employees of ARH. Many of the women in leadership, including Trena, said their favorite thing about ARH is the people they get to work with every day.

“I can’t begin to tell you how rich my life has been because of the people who have been a part of it along the way,” Trena says. “Any organization, I don’t care what kind it is, is only as good as it’s people and it’s mission. I believe in the mission of ARH, I think the services we provide in eastern Kentucky and southern West Virginia are critical to our communities. It’s our community, the people we serve and the employees who make it a pleasure to come to work every day. When you work with wonderful people it’s easy to be happy at work.”

Trena recalls an instance when she was out in the community and an individual she cared for during her time as a nurse recognized her.

“He said, ‘You don’t remember me, do you?’ I had no idea who the gentleman was, but he remembered me,” Trena says. “The gentleman had been in a terrible accident and I remember that we thought he was going to die. He remembered me because he remembers me telling him to hang on. It wasn’t necessarily what I did for him that he remembered, it was that I talked to him, and he needed that. He needed someone to tell him to fight.”

This encounter illustrates the amount of impact healthcare workers can have on a daily basis.

“It goes to the crux of what we do. It’s about that man and all the others like him. I’m just one little piece in this huge puzzle and I think that’s what matters.”

Trena’s career success is, in part, due to her parent’s encouragement throughout her life. They served as her biggest mentors because of their optimism, encouragement, and determination.

“I can remember being very young and my dad telling me I could be anything I wanted to be…I graduated from high school in 1974 and I didn’t realize at the time, because my father was so open about us doing whatever we wanted to do, that gender might make a difference in what I could do in a career,” Trena says. “My parents were very focused on us developing a personal level of integrity, being honest and open, working hard and communicating well. Those things have helped shape my life and my career.”

Trena passed along this same sense of perseverance to her children, and now her grandchildren who are nine and 14-years-old.

“The thing that matters most in life is having a strong faith and I try very hard to put God first in my life and trust what He has planned for us,” she says. “I’ve talked to them about the importance of the kind of person they become. All the money and power in the world won’t make them happy. What makes a person truly successful is leaving your mark, making a difference in the world and doing it with joy.”

When she is not working Trena loves to spend time with her kids and grandchildren at the lake, a place she says they stumbled upon almost by accident. ARH is something like a family business for the Hall’s. When her son was hired as Assistant Administrator at Middlesboro ARH Hospital his family moved to accommodate his career change. Trena says they would travel through Powell Valley on their way to visit and fell in love with the lake and surrounding area.

“I remember thinking it was the most beautiful place I had ever seen, and I’ve been a few places,” she says. “I’ve been to Alaska and it was gorgeous, but I just thought that valley was beautiful. I found my little slice of heaven and I think we’ll probably retire there.”

Although her son has since been promoted, Trena and her husband continue to visit Powell Valley every chance they get.

When asked what advice she has for a young woman interested in entering the medical field she had this to say:

“I think they really need to do their homework and make sure they understand the field they’re getting into. If they’re going into a clinical role they need to feel a passion for what they do because it’s a tough job. If they’re going into healthcare administration they need to understand that healthcare administration is arguably one of the toughest business leadership roles you can take. There’s nothing you can’t achieve if you are really determined and never give up. Perform the best you can, be the best you can be at what you do and be willing to work hard.”